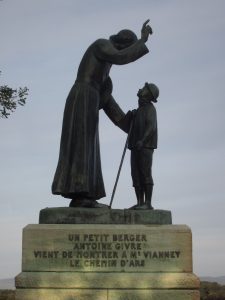 John Baptist Vianney was born at Dardilly, France on May 8, 1786 into a very humble and Christian family. His mother being a very religious woman led him, at a very early age, to a life of profound devotion to God which consumed him completely. He was quoted as saying “I owe a debt to my mother. Virtue goes easily from mothers into the hearts of their children, who willingly do what they see being done.”

St. John Vianney wanted to become a priest, however being raised during the French Revolution and its aftermath made learning, especially Latin grammar, almost inaccessible. Without a proper education, St. John Vianney struggled through his years in the seminary. He was ordained a priest on August 13, 1815 primarily through his strong reputation for goodness and holiness. The vicar general was quoted as saying “The Church wants not only learned priests but, even more, holy ones.”

In 1818 St. John Vianney was assigned the parish priest of Ars where he remained for 41 years until he died. His effect on this tiny village was remarkable for he changed it from a village of indifference to one alive with Christian spirit. The transformation did not occur overnight; it took ten years of patience, personal example, and Divine grace. St. John Vianney was very serious about his religious obligations and expected as much or more of himself than of the village people. Over time the people of Ars realized that St. John Vianney practiced what he preached.

The transformation of Ars became well known and soon people from all over France, Belgium, England, and even America came to Ars to have their confessions heard by St. John Vianney and to receive his spiritual guidance. Because of his strong desire to save souls he endured anywhere from 12 to 17 hours a day in the confessional and could often tell a person’s sins even when they were withheld. The instructions he gave were often short and simple, yet they sustained the deep faith and love of God that was the main principle of his life.

A few years after coming to the village of Ars, St. John Vianney started a free school for girls, called “The Providence”, which over the years developed into an orphanage for deserted children. The alms to support this orphanage were often insufficient and due to St. John Vianney’s prayers the cook was able 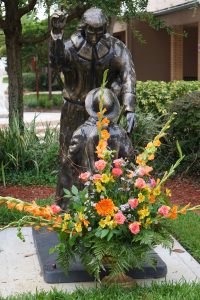 to make ten 20-pound loaves of bread out of only several pounds of flour.

After living a life with remarkable spiritual strength, unfailing humility, gentleness, and patience, John Vianney died on August 4, 1869 at the age of 73. He was canonized by Pope Pius XI in 1925 and in 1929 was designated the patron saint of parish priests.

More information on St. John Vianney can be found in The Catholic Encyclopedia on the New Advent Catholic website.